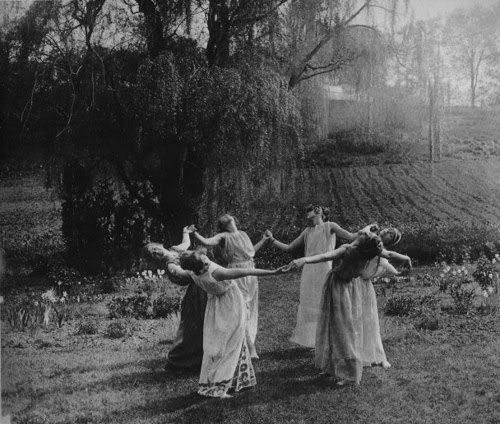 Lesson 12 - The Power of Covens and Circles

In the emergence of Witches, the ability to use their imagination, the language, and the growing knowledge became a source of value and comfort to the tribe. In their ability to share knowledge with a few was essential for the loss of their magic user, the spell crafter was no less than the loss of a library today. So it was the Witches, in all their names and forms, began to utilize another emerging human skill, which is shared with other life forms, and that was distributed knowledge. That no one person could memorize everything, hold all that information, and so the act of cooperation became an essential part of their practice.  This gave birth to the Circle and Coven.

The idea of a cooperative group, allows for knowledge to be specialized a bit, so that information including spells and other skills could be expanded. The second part is to assure that basics were trained into the next generation. This is a process that saved and allowed for the long-term, multi-generational craft development. This is how to Witches created the craft, by creating circles and covens.

Remember any knowledge can be lost if it is not passed onto a third generation. The Grandmother must passed it onto a grandchild, either directly or through their own child. If it fails at any linkage, the knowledge can be lost until rediscovered. In truth, this often means that we lose the name of who found out, and how can be lost forever.  So forming a circle and a coven was the way our sacred knowledge can be passed on. That which is remembered lives.

So once Witches have their circles, they soon discovered that sharing sound in the form of chants created a synergetic effect. They discovered that one plus one became more than two. That by combining their efforts that there was a greater effect. By reflecting each other in their minds they are able to create their spells to bring greater luck, better healing, better results. By adding 3rd person you bring harmony. By bringing a small crowd in union, Witches could alter the course of the tribe, even the world.

So to form into Covens and Circles is to share knowledge, preserve memories, and to create energy that is beyond the individual. In cooperative groups, Witches have greater strength in their numbers, and that is our future.